Katy Perry at the Apollo

Yesterday, it was very hard to concentrate. The clocks ticked in some kind of time warp that made it possible to check the time several times within a second (well, maybe not quite). After almost six months of waiting, my 16th birthday present was just around the corner. It was a matter of hours until I saw Katy Perry perform at the Hammersmith Apollo.

The evening lived up to all my expectations. We arrived at about half past seven and to my delight, not only did we not have to queue, the disabled seats happened to be the best in the house. Sometimes, the old wheels pay off. Watching the pit fill up only served to stir up my excitement, as the music got louder and louder and the audience’s buzz became palpable.

A band came on at eight and a tense silence fell. It was clear that no one knew who they were, which was not helped by the fact that the singer was cloaked in a feathery veil-type garment. The music started. At first I was simply deafened and could not really listen to the song. I realised at some stage that the lyrics were not English but the noise meant I could not work out what language it was. When the song ended, the singer enlightened us by revealing that her band was called Yelle and that they were from France. Well, the strange music made sense then. The French are not exactly renowned for musical talent. Unfortunately the music did not improve and most of the audience remained puzzled as to why this band had been chosen to support Katy Perry. Finally (and I say that emphatically), they left the stage and Katy Perry’s DJ Skeet Skeet came on to warm up the crowd. He pumped out some chart hits and the party swung into life.

We danced. We cheered. But still, we wanted Katy. Suddenly, the curtain rose, revealing a fairytale backdrop of sweets and cakes. Three cloud shaped screens showed a cartoon of a young girl, Katy, forced to work for an evil butcher. She runs away and buys herself a cupcake from a rather good looking baker’s boy. It is love at first sight. The rest of the concert carried on the story as the fictional Katy falls asleep and dreams of finding her baker’s boy. 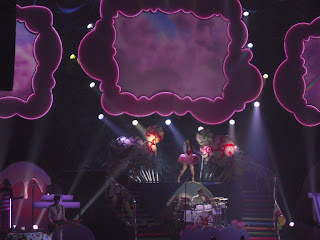 The first song was incredible and from that moment on we were truly enthralled. Katy Perry sung all her hits and songs from her new album Teenage Dreams. She does more than impress us with her voice, she puts on a show. Her singing is always amazing and powerful. The set is the stuff of dreams. And she, undoubtedly, looks incredible. The great thing about this concert was that the songs are all happy. This sounds like an odd thing to say, but it is a lot easier to have fun while listening to feel-good, up-beat music. Everyone sang along with gusto and we had a good go at blowing the roof off. It was awesome. I had expected some more songs from her first album One of the Boys, however only a few featured. At some points a lot of the audience did not know the song being sung, but this was the only flaw. When the big numbers came on, you could feel the excitement. I have never danced so much in my life. 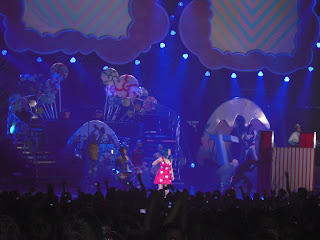 It is surely a sign of a good show if you wake up with not one, but all, of the songs still in your head. In that case, it is safe to say that Katy Perry’s opening night in London was spectacular.